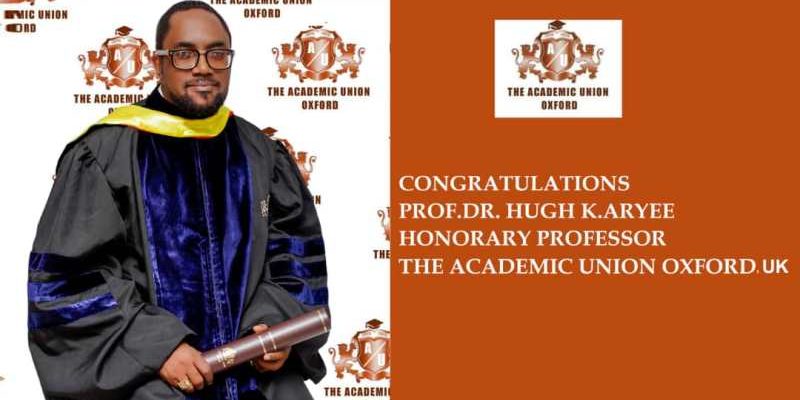 BY THE MANAGEMENT OF HANERGY GLOBAL GROUP

The Presidium of the Academic Union, Oxford has conferred a lifetime Honorary Professor title on the Chief Operations Officer of Hanergy Global Group. At a prestigious hybrid ceremony held in Oxford, England and accessed online, on March 25, the Academic Union Oxford (AUO) conferred an honorary professorship on Dr. Hugh Keku Aryee and other distinguished individuals.

Hanergy Global Group is a diversified multinational business group with interests that cut across different sectors of the economy and having branches in United States of America, United Kingdom, United Arab Emirates, South Africa, Australia, and Ghana.

The Academic Union is an international academic association of over 350 University Chancellors, Scientists and Researchers which belongs to AUO and Club of Rectors of Europe Council. The committees and the Union pursue the ideals of Academic Excellence, Innovation and Accessibility and are committed to disseminating these core values through its worldwide community.

The honorary professorship title was established by Academic Union, Oxford with the support of the Club of Rectors of Europe as a symbol of credit and expression of honor to people, who have actively promoted social and intellectual progress of modern society, integration, and empowerment in the fields of science, culture, and business, 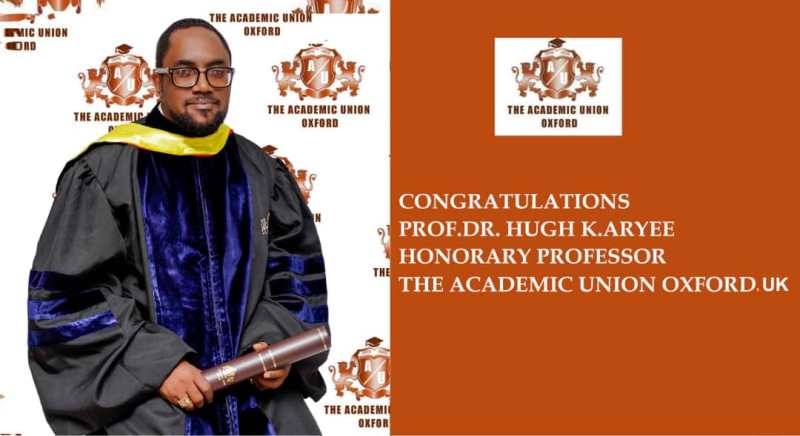 The conferring institution, Academic Union Oxford is an international academic association of over 350 university Chancellors, scientists, and researchers. As a body, it is committed to disseminating its core values through its worldwide community.

According to a statement issued by Dr. Vincenzo Costigliola, Honorary President of AUO, Dr. Aryee was chosen to receive this distinction for “his role in uplifting professional and ethical standards in diversified portfolio of businesses, his innovative ideas in the development of several tech and brands of products for the Hanergy Group worldwide”.

Watch a recap of the Honorary Professor Title ceremony

With this conferment, Prof. Dr. Hugh K Aryee  now have the privileges and the priority right to publish scientific and presentation articles, monographs and brochures in the official Academic Union editions,Socrates Almana” (Oxford, UK, Reg. No. ISSN 2053-4736) and on-line magazine ‘The Leaders’ Times’ https://ebaoxford.co.uk/e-magazine/item/428-the-leaders-times-3-208-2020

For more on this, please visit https://www.oau.ebaoxford.co.uk/about-us-oau/about-honorary-professor-title

He received his Master’s Degree from the prestigious Paris School of Management-PGSM Paris, France in 2005 (Project & Strategic Management)

He is also received his Doctorate Degree from the prestigious Swiss School of Business Management & Innovation, Switzerland.

He is also a recipient of several awards including the induction into the CEO’s Hall of Fame 2018 by the Africa Leadership Magazine as the persons of the year award held in South Africa including high profile personalities in Africa including his excellency the President of Rwanda, HE Paul Kagame, former President of of Madagascar HE Marc Ravalomanana and several others.

He was also the recipient of the Business Excellence Awards by the World Confederation of Business. He also won the International Business Achievers Award by the Swiss Business School of Management and Innovation.

He has also written extensively and featured in several media programs and magazines published to his credit. He is the publisher of the Golden Ghana -The Pacesetters Corporate Magazine that features businesses, economic outlook, sight and sounds Ghana featuring several key tourism attractions. The magazines are mainly circulated on major airlines flying to Ghana.

Management congratulates its Chief Operations Officer in celebrating milestone. Many thanks for all who supported in diverse ways towards this lifetime achievement.